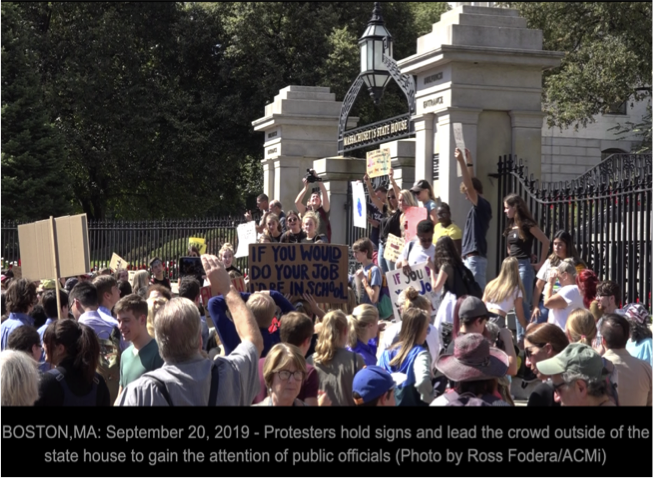 ARLINGTON, MA – On Sept. 20, Boston joined many cities across the globe by taking part in the Climate Strike to urge public leaders to take action against Climate Change. Following the lead of 16-year-old Swedish activist Greta Thunberg, students and young adults from all over Massachusetts missed school to spread awareness about solutions to the growing climate crisis. The strike was organized by Massachusetts Climate Strike, a grassroots organization pushing for progressive climate action and the Green New Deal. Their goal was to get the attention of the United Nations Climate Action Summit on the following Monday.

The organizers have three distinct goals they hoped to accomplish with this protest:

Students were allowed to miss classes if their guardians signed a note to get them out of school early, with it treated as an excused absence. “We believe strongly that regular attendance plays a critical role in our students’ academic success,” said Dr. Brenda Cassellius, Boston Public School Superintendent, in a letter to families prior to the strike. “We also believe in the power of young people to effect change on important issues, and that valuable learning can occur through participation in civic activities.”

Hartman Deetz is a Wampanoag Native American from Mashpee who spoke on stage during the protest. When asked what he hoped the protest will accomplish, he said “It’s about pressure, pressuring the society at large to recognize there needs to be change because the status quo has been in place too long. Too many of the ways we address and deal with the problems enforce and build on the status quo. They look for ways for the status quo to exist with a new paint job, but we need a fundamental change in how we function as a society, not a new branding of the same old thing.”

Greta Thunberg and other organizers have estimated that four million people participated worldwide. Australia counted upwards of 300,000 students and workers in the streets of Melbourne, Sydney, and other cities in the biggest demonstration the country has seen in years. In the United States, New York Mayor Bill de Blasio tweeted out an estimate of 60,000 protestors, although organizers have put the number closer to 250,000. Boston and Denver saw crowds slightly smaller than 10,000, while San Francisco more than tripled that with 40,000 protestors.